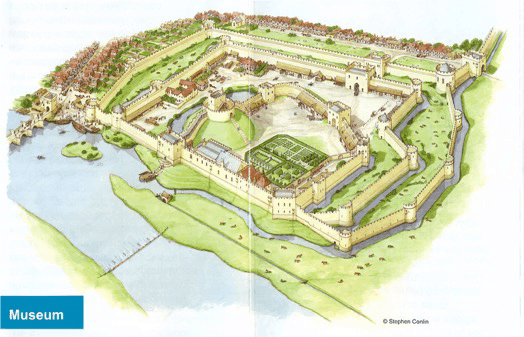 The HA & HG tour of Wallingford Castle took place on May 18th and began in the Town Square opposite the Town Hall. The weather prospects looked mixed with a prospect of rain but clearing later. Unfortunately the HA & HG turnout had shrunk from an anticipated twelve to four no doubt in apprehension of the weather.

Our guide, Judy Dewey and a couple of trainee guides met us as arranged. We tossed a coin and decided to go. As we set off there was towering black storm cloud approaching of apocalyptic proportions. Once we entered the Castle grounds the heavens opened and after about a hundred yards, we were forced to shelter under a tree carrying metal umbrellas, very sensible, to hear Judy’s talk on the origin of the castle, which was almost inaudible due to the force of the rain.

The rain stopped and Judy explained how important the castle was strategically and that many Kings and Queens had made it their power base. Moving through the multi layers of ramparts, it resembles a badly laid out golf course, but with Judy’s expertise it is revealed as a formidable fortress whose size and strength demanded respect.

Within the inner bailey are the remains of the College of St Nicholas once the guardian of the Kings Chapel at the castle. Owned by the Oxford clergy it was not allowed to be demolished when the castle was razed by Oliver Cromwell in 1652. Our tour continued until after nearly two hours we were back at the outer walls, Judy having given us a non-stop commentary.

Due to the sombre weather we decided not to adjourn to the pub and after thanking Judy for her efforts we dispersed and went our own ways.