We set off for the Cotswolds under cloudy skies, but were able to explore the beautiful gardens at Bourton House, near Bourton-on-the Hill, without putting up our umbrellas. Tea and coffee in the Grade I listed tithe barn, built in ashlar limestone with a limestone slate roof, gave us a chance to enjoy its magnificent interior, with original roof timbers. A dedication stone in the barn carries a date of 1570 and the house itself, not open to the public, originally had a brewhouse, coach house, and stables, when it was first built in the 16th century. It was rebuilt in the Jacobean style in 1598 and again in the Georgian style, at the beginning of the 18th century, retaining some of its earlier features.

Our focus was the award-winning three-acre garden that surrounds the Manor House. Years of dedicated work by an expert team employed by recent owners have produced a design that includes topiary, a knot garden, walks, terraces, an 18th century walkway with vistas of the landscape beyond,  spring-fed water features, a shade house, a white garden, and wide herbaceous borders, with many rare and exotic plants. These provide swathes of colour in the late summer and autumn, before being protected inside during the winter months.

After a brief lunch stop at Batsford Arboretum nearby, the coach took us up a long, winding drive, through classic English parkland, leaving us at the gates of Sezincote. As we crossed a stone bridge, decorated with sculptures of Brahmin bulls, past a fountain caught in the coils of a bronze serpent, we saw an impressive vista – a country house in the Indian Mogul style, but built in local stone, nestling in the Cotswold countryside. The exterior combines Hindu and Islamic details characteristic of the reign of Mogul emperor Akbar (1556–1605). Islamic features include a central copper dome, small minarets with slender columns, a ‘chajja’ (cornice with deep brackets), peacock tail arches and a tall central arch. The pillars and horizontal beam over the front door, and the lotus designs, are Hindu in origin. To the left is an elegant orangery. The home farm buildings, also forming part of the Mogul scheme, are no longer in active use.

The estate was purchased in 1795 by John Cockerell, made wealthy by his career as a colonel in the army of the East India Company. In 1798, it passed to his youngest brother, Charles, and the commission to build a house in the Indian style was given to another brother, the architect Samuel Pepys Cockerell. The accomplished artist, Thomas Daniell, provided the inspiration for the creation of the house, which was begun in 1805. He drew on ten years of experience travelling in India, making numerous aquatints, watercolours and oil paintings of Indian architecture and landscapes, using a camera obscura. Charles Cockerell’s nostalgia for his time in India was also reflected the design for his bedroom in an octagonal room, decorated to resemble a tent with wooden spears supporting a canopy. 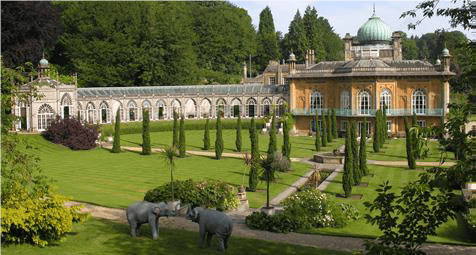 The house is constructed in warm local stone and has a green weathered copper dome. The curved orangery terminates in an octagonal pavilion. However, the indianizing of the house did not extend to the interior, which is neo-classical in style.

In the company of our guide, we explored the inside of the house and were introduced to some of Daniell’s works, including a painting of the Prince Regent’s visit in 1807. This impressed him to such an extent that he changed his plans for the Royal Pavilion in Brighton, designed by Thomas Nash. From the Stair Hall, an impressive iron staircase separates into two flights to sweep up to the upper floor, where we visited the rooms open to the public. These, including the Saloon, Master and Oriental Bedrooms, have been remodelled over the years since the house was bought 1944 and gradually
restored by the Kleinwort banking family. In the Oriental Bedroom, the poles from Charles Cockerell’s original ‘tent’ been incorporated into an elaborate bed, topped by a green dome. In the 1950s, the designer John Fowler was responsible for the exceptionally high quality of redecoration in the major rooms. The Dining Room’s elegant wall paintings, capturing the spirit of Thomas Daniell’s work, were painted by George Oakes in 1982 and include a trompe l’oeil, which conceals a secret door.

As we left Sezincote, we regretted not paying an earlier visit to the temple of Surya, the sun god, to ask for better weather to explore the gardens. The temple and the Indian stone bridge were part of a design scheme by Daniell, but Humphrey Repton may have played a part in layout out the grounds at Sezincote. Unfortunately, the skies opened, sending us all scurrying back to the coach, leaving more to discover on a future visit.