Watch this space for details of the meeting

The results of the UK’s largest ever archaeological LiDAR survey have recently been made publicly available for citizen science analysis. The 1400 km2 survey, covering the Chilterns AONB and its surroundings, records the topography of the landscape in great detail. Any archaeological sites surviving as earthworks, even just a few centimetres high, will be detected, giving us evidence of people living and working in the region from the Neolithic to the 20th Century.

The technique is particularly powerful in wooded landscapes, able to show up sites beneath the tree canopy where the archaeological survey has traditionally been very difficult; with more than 20 % tree coverage, the Chilterns AONB has many secrets to reveal. In this talk Dr. Ed Peveler will be introducing this National Lottery-funded project, explaining more about the survey, letting us know how we can access the data to do our own archaeological exploring, and showing us some of the exciting results that are already emerging.

Dr Ed Peveler is the Landscape Heritage Officer at the Chilterns Conservation Board, responsible for the technical elements of the Beacons of the Past project, and for the development and delivery of volunteering opportunities such as skills workshops. Prior to joining CCB, Ed completed his AHRC-funded DPhil at the University of Oxford, investigating the process of construction and building materials in Roman Oxfordshire. He also worked as Assistant Director of the University of Oxford excavations at the Roman small town of Dorchester-on-Thames between 2014 and 2017 and has excavated at sites in Britain, Italy, Albania, Tunisia, and India. 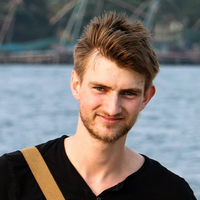 I am currently the Landscape Heritage Officer for the Chilterns Conservation Board ‘Beacons of the Past’ project (2018-2021).

I completed my doctorate in 2018 at the University of Oxford School of Archaeology, which explored the technical, economic, logistical, and social aspects of Roman building material production and trade in southern Britain.

Between 2014 and 2017 I worked as Assistant Director of the Discovering Dorchester excavation project, run jointly by the University of Oxford, Oxford Archaeology, and the local community of Dorchester on Thames.

I completed my Bachelors (in Classical Archaeology and Ancient History) and Masters (in Archaeological Science) also at the University of Oxford, producing theses on social and cultural readings of Roman construction techniques at Butrint, Albania, and on the trade of Roman grey coarseware pottery in Oxfordshire, respectively.

‘For the sake of decency, gentlemen, don’t hang me high.’  This was the last request of modest murderess Mary Blandy, who was hanged for the poisoning of her father in 1752.  Concerned that the young men amongst the crowd who had thronged to see her execution might look up her skirts as she was ‘turned off’ by the hangman, this last nod to propriety might appear farcical in one who was about to meet her maker.  Yet this was just another aspect of a case which attracted so much public attention in its day that some determined spectators even went to the lengths of climbing through the courtroom windows to get a glimpse of Mary while on trial.  Indeed her case remained newsworthy for the best part of 1752, for months garnering endless scrutiny and mixed reaction in the popular press.

Born in London, Summer Strevens now lives and writes in Oxfordshire. Capitalising on a lifelong passion for historical research, as well as penning feature articles of regional historical interest, Summer’s published books include Haunted Yorkshire Dales, York Murder & Crime, The Birth of Chocolate City: Life in Georgian York, The A-Z of Curiosities of the Yorkshire Dales, Fashionably Fatal, Before They Were Fiction and The Yorkshire Witch: The Life and Trial of Mary Bateman,  the first dedicated biography of the woman who on the morning of 20th Match 1809 was hanged upon York’s ‘New Drop’ gallows before an estimated crowd of 20,000 people.

The Construction of Victorian and Edwardian Henley

Following on from his earlier talks to the Group on the effect on the town of the Boer War of 1899-1902, and the unprecedented victory of the Liberals in the Henley constituency at General Election in 1906, Michael will look in detail at the fabric of the Victorian and Edwardian town. How and why did Henley grow in late Victorian and Edwardian times?&nbsp; Attention will be given to its public buildings, to the creation of the infrastructure which shaped its development, and to the influences of local government and other local pressure groups on the process.

In particular, Michael will consider the builders who extended Henley southwards, with the New Town, St Andrew’s and St Mark’s Roads developments. They were the work of a close-knit group of families; the Owthwaites, Clements’, Hamiltons, and Wilsons. The heads of these families were remarkable men, often local and from artisan backgrounds, who speculated in land, organised and managed the large construction projects, and became significant property owners, not just in Henley but also in neighbouring towns. Michael’s talk will explore the way the builders were also key figures in the governance and civic life, shaping not just Henley’s physical structure but also its social and political life in the years up to the First World War.

Michael Redley lives in Norman Avenue in Henley. His doctoral work in history was on East Africa in colonial times. He made a career in central government and in statutory agencies concerned with broadcasting and at the University of Oxford. More recently he has returned to his roots in history.  He has published on various topics and teaches courses at the Department for Continuing Education in Oxford on twentieth-century British history and politics.